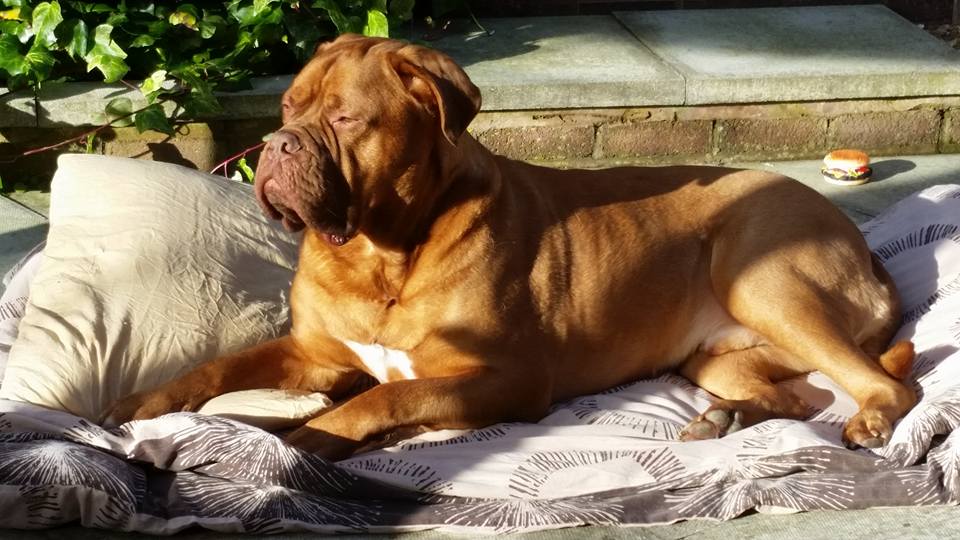 Theodore is a 73 kilogram Dogue de Bordeaux, who had previously ruptured the main ligament over his knee called the cruciate ligament on his left hand side 2 years earlier. In July he started limping again x rays showed suspicion that he had ruptured his ligament on the right hand side.  Theo would require surgery and on going rehabilitation.

Surgery was arranged and Theo had a TTA operation (Tibial Tuberosity Advancement), which is a surgery performed on dogs  involving cutting the top of the shin bone (the tibia), moving it forward and stabilising it in its new position in one of a number of ways. 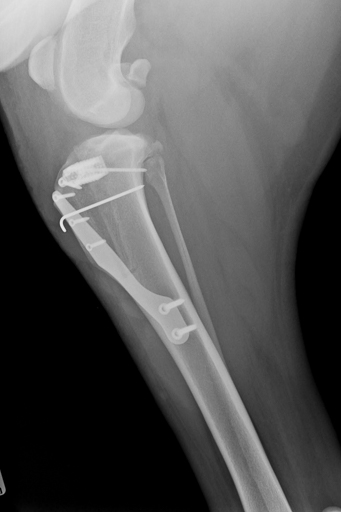 Theo was therefore the first client to benefit from our cruciate package (surgery and rehabilitation).  Mochdre Vets has been set up to encourage rehabilitation through physiotherapy, laser therapy and hydrotherapy with the added bonus that everything happens under one roof!

As well as rehab we advocate ‘pre-hab’ this is ideal where we know the dog is going to have surgery. Pre-emptive laser therapy has been shown to help improve healing and result in quicker healing times.  We also recommend the dogs get used to the pool or treadmill before they are recovering from an operation as they will be on restricted exercise and then put in an unusual situation.

On the day before his operation Theo had his laser session.

The day of the operation everything went smoothly, Theo had his peri operative x rays taken and everything looked good.  It was planned that Theo would stay overnight to ensure he was given adequate pain relief and staff members stayed with him to ensure he was checked on and kept comfortable.

The day after surgery Theo was discharged after he had another session of laser therapy.

Theo also started a course of sessions with Gwenan, our physiotherapist. Gwenan was able to do massage techniques and feel the definition of Theo’s legs and formulate a physiotherapy plan for him. 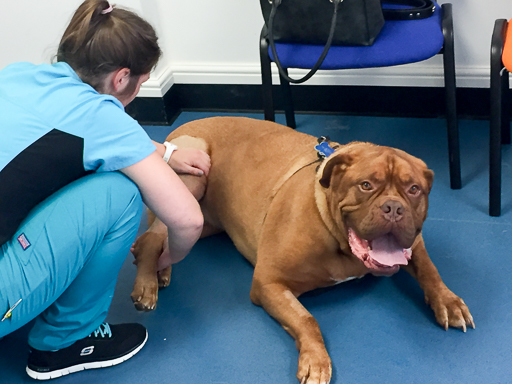 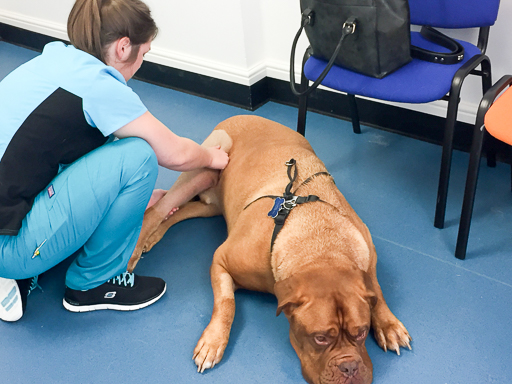 As you can see Theo enjoyed his physio sessions and really relaxed, it was difficult to keep him awake! 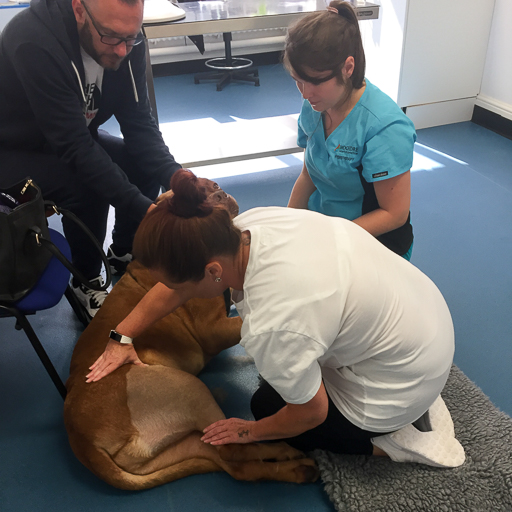 The best part of offering an in house physiotherapy service it meant Gwenan could teach his Mum and Dad little exercises and massages that they could do themselves at home. This is a really important part of rehabilitation it keeps worried owners involved but has an ongoing proactive effect as the animal feels better and encourages on going appropriate movement of the limbs.

We take a holistic approach not only focusing on the affected limb but we incorporate other limbs into the programme as they may suddenly be doing more work and definitely in the case of Theo taking more of his weight. 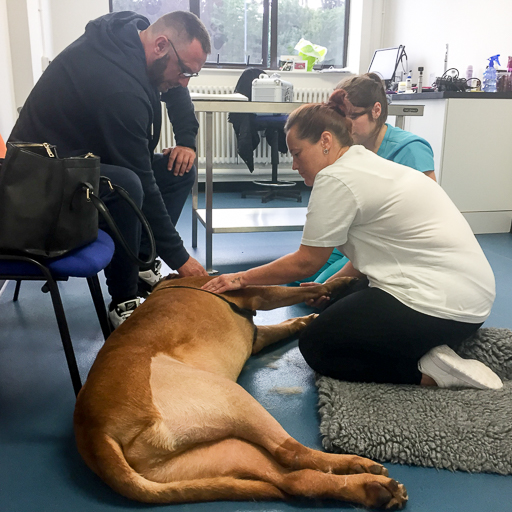 Once Theo had his stitches out 2 weeks after his operation. He was able to start the next stage of his rehabilitation – hydrotherapy. The orthopaedic surgeon had recommended the treadmill as it was more focused for him. When Theo ruptured his previous cruciate he went in a pool so he is not averse to swimming but the plan was to do 6 weeks of treadmill then long term have him in the pool. As there is not one plan that suits all its good to have options.

We offer a gold standard package for all orthopaedic procedures like cruciate repair.  You pay one fee which includes the operation, pre, peri and post operative pain relief and antibiotics, a course of Laser therapy , a full hydrotherapy and physiotherapy programme offering pre hab and re hab therapies and post operative x rays.

To our disbelief we were about to go on a 2 week holiday (which was hard enough to leave our baby!) but his 2nd cruciate ligament went the week before we were due to go, this meant he would be having his operation while we were away.

If it was any other vet we’d have cancelled our holiday to be with him but knowing he would be with his Auntie Sarah left us feeling comfortable enough to go.

So Theo had his op and all went great and went home with my sister the following day, unfortunately he then picked up an infection which meant he would have to return to the vets, as you can imagine we wanted to come home. He spent 10 days at the vets and Auntie Sarah even took him home, we were updated daily with pictures, phone calls and text messages so we felt re-assured and relaxed the whole time.

When we returned Theodore was doing amazing, we can’t thank Sarah and her team enough for taking such good care of him.

We are still having two appointments a week for physiotherapy, hydrotherapy and laser therapy and there is a noticeable improvement each time he has received one of these treatments, he is improving massively and becoming stronger every day.

It’s also so nice to see that even after spending 10 days at the vets with no Mummy and Daddy around, Theodore still gets so excited when we arrive to see everyone because he knows he’ll get lots of fuss, love …. oh and treats!

You’re probably thinking about the vet bill reading this and all aftercare that Theo has had, well, it wasn’t bad at all, Sarah did us a package which has included everything, even the extra x-rays, blood tests and antibiotics he had with the infection were all included. I’d pay the world anyway for our boy to have the care he has had at Mochdre Vets but I didn’t have to.

Here’s Theo enjoying the hydrotherapy pool as part of his ongoing rehabilitation.